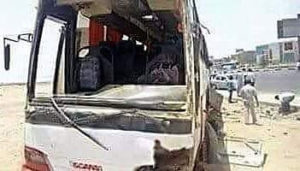 VOM workers reported early Saturday morning that at least 27 Christians were killed in an armed attack on a bus. The bus was on its way to visit a monastery, when it was stopped by 10 armed men. They boarded the bus and asked passengers for their religion. When the attackers learned they were Christians, they opened fire. Children were among the about 50 Christians on board. The local VOM worker reports that many of the injuries are severe, and more martyrs are expected before the end of the day as people succumb to their injuries.

How you can pray: